The Sailing programme has been updated to show what is (currently) planned for 2023 including the Summer Cruise.

If you’ve viewed the most recent Sailing Programme on the CSD website you’ll be aware that the Summer Cruise itinerary is set with Charters and Sea Times taking Sea Essay to and from Pornichet, South Brittany.

Sea Essay is however still available for charter between 26th August and 2nd September based at St Malo.

A visit to the JRCC at Kites Croft, Whitely, Fareham has been arranged for 10.00 hours on Sunday 12 th March 2023.
JRCC is the new name for the NMOC and previously Solent Coastguard.
Members may recall that a previous visit was arranged on the same day that a severe storm paid the UK a visit and a number of members could not attend. As numbers are limited preference will be given in the first instance to those who dropped out previously.
Names and Car Registration to Colin Smith by email to csddaysails@gmail.com

The Skippers Newsletters page has been updated following the issue of SNL04 2022.

All Skippers Newsletters are all available on this page : https://channelsailing.org/skippers-newsletters/

Andrea Walker explains how she got started in sailing.

I wanted to give sailing a try, so I joined the CSSA and found my local sailing club Channel Sailing Division (CSD). CSD runs Taster Days (Day Sails) on Sea Essay so I booked in for one.

Having never been sailing before I was unsure what to expect. I found the boat yard Mercury Yacht Harbour easily and clambered aboard helped by the mate. Two other crew had also just arrived. They had both been sailing numerous times with CSSA and had great fun.

Once the other crew arrived, we had a safety briefing and got kitted out with life jackets and safety lines. The mate started showing us some of the knots we needed to know, which I wasn’t expecting and I still don’t think I can do the knots correctly (more practice required).

It wasn’t long before the engine was started, and we left the berth. Once we got out of the harbour the work started we were all given jobs to hoist the sails and then we were off! I felt an incredible sense of freedom and began to be much more aware of the wind and the black clouds on the horizon.

We sailed down the Hamble River out into Solent Water doing about 7 knots in a fair wind, the guys who had been sailing before took the helm but I was surprised to be asked to take the helm as well. Unfortunately for my fellow crew I was rather heavy handed at the helm and our previous straight course began to look more like a slalom course! But with help and encouragement from the Mate, the Skipper and the crew I improved marginally and was even given another opportunity to helm on the way back, still a zig zag course but slightly less so than previously!

It was amazing how quickly we picked up some of the sailing vernacular and everyone had a go at helming, tacking and raising and lowering the sails. We learnt about who has right of way and to observe the weather changing. It was also interesting to see the coast from the water side. The Solent is a busy place and we passed many different vessels from ferries, other small vessels including the Harbour Master and some huge commercial ships. We anchored up for lunch just as the rain hit so we sat comfortably in the cabin. Using the loo on the boat was another learning experience and you need to be comfortable with being at close quarters with other people generally on the boat as space is very limited.  The Mate and Skipper suggested that I try another Taster day and a 2 or 3 day Sea Time Cruise trip to get a better feeling for sailing, which I hope to do in the Spring/ Summer.

All too soon we were back with the engine on chugging up the Hamble River back to the harbour. We managed to get the boat back into its berth, made sure it was secure and tidied up the boat before it was time to depart.

The next morning, I looked out of my window and breathed a sigh of relief that I was not sailing that day, it was pelting it down with rain and blowing a gale!! The Taster Day was a great introduction to sailing and I will be back to try it again in the Spring when the program starts again. Anyone thinking about doing a Taster Day, just do it, you may surprise yourself how much fun you will have and how much you will learn.

Our brand new yacht, a Dufor 390, is now on here inaugural Summer Cruise.

Documentation such as the Operations Manual and Familiarization Guide is available to skippers through a new menu on this website underneath the ‘Sea Essay’ menu. The password for this page is available from the webmaster.

What is the demand for CSD Training Courses?

Historically CSD have provided a training pathway from novice to RYA Yachtmaster. Following a change in RYA criteria for Recognised Training Centres we have been unable to offer the complete package in-house and require collaborations with external RTCs and instructors, these have had varying success.

We are now in a position to formalise an arrangement and have RYA Instructors who are prepared to put in the effort to make it happen if there is sufficient call for it among you.

So if you are contemplating any sailing training next year or further in the future, particularly Competent Crew, Day Skipper, Yachtmaster Coastal or Offshore, please contact our Training Organiser Andy Rankine (training@channelsailing.org) as quickly as possible.

During the last year or so we have reviewed and combined our syllabus for Boat Handling and Sail Trim to form a new course: 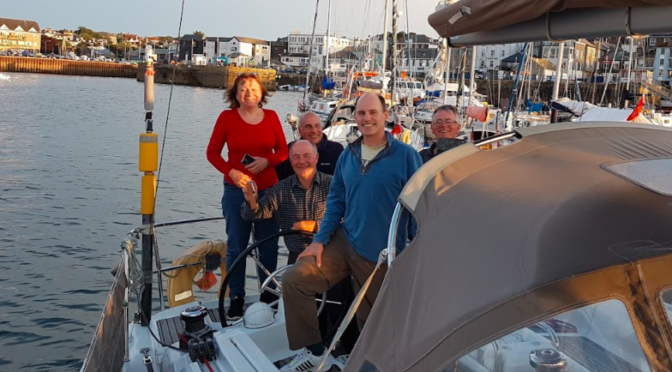 I have been wanting to explore the West Country for several years and finally my stars aligned. After checking availability with a prospective mate and other crew, I took the plunge, booked the charter and time off work.

With the rule of 6 in force we sailed with 6 POB. All on board had experience and all but one had previously sailed on Sea Essay. Skipper and Mate had both attended a Skippers Refresher event organised by another club prior to this event.

Since we had heard that restaurants might be fully booked we victualed on the basis of eating on board on at least 4 evenings. This worked out very well in practice.

We took over Sea Essay at 1200 and slipped our lines around 1630 for a short passage from Mayflower Marina to Newton Ferrers on the River Yealm. When East of Drake’s Island we raised the main with the intention of sailing with one reef but encountered an issue with tangled reefing pennants. With this resolved we had an enjoyable beat until we made the leading line to Wembury Church. With the wind increasing we took in a reef and then in a light drizzle, we entered the River Yealm under engine. Met by HM near the visitors’ pontoon and allocated a residential mooring for the night.

Little to no wind – Carefully exited R Yealm after LW.  Passage to St Mawes, Famouth Marina and rafted at Falmouth Yacht Haven.  Ate ashore at the Pizza place on the foreshore.

Inclement weather forecast. Spent day in Falmouth with some crew exploring the town and others visiting the Cornish National Maritime Museum.

Passages under sail to the River Helford.

Then a passage towards Fowey.

Responded to a PAN PAN call from two dinghy sailors in a swamped dinghy.   Photo below is of the dinghy after a tow to Portscatho.

Topped up with water – Purchased Gas. The latter is only available at Mixtow Creek which is shallow at LW.

We then took in some of the coastline en-route towards Polpero which turned out to be a fantastic lunch stop.

We then had an exhilarating downwind passage to Salcombe.

Took advantage of the Salcombe Yacht Club’s showers. Passage under engine to Burgh Island for lunch at anchor.

Passage under sail to Newton Ferrers.

Issue with the Fwd heads – would not pump in water.

Tidal Gate at LW in R Yealm at the Bar.  We then took the opportunity to for MOB Practice under sail and engine in Plymouth Sound and sailed to an anchorage at Cawsand. After an excellent salad lunch and with a moderate breeze we has an exhilarating sail, short tacking all the way up to Saltash to check our clearance under the bridges.

We then explored the R Lynher ….

before leaving two crew at the Mayflower marina and mooring in QAB. We ate ashore at the Murghai Restaurant close to QAB marina.

No one spotted my deliberate mistake in SNL 02/2021 in identifying the tap for the Aft (No.2) Water Tank.  It is in fact the top one on the manifold and is very obvious when you look at the arrangement of the pipework.  An update to the second skipper’s newsletter for 2021 has been sent to all regular skippers of Sea Essay.

For reference purposes these newsletters can also be viewed and downloaded from https://channelsailing.org/skippers-newsletters/